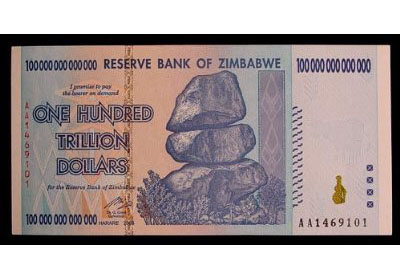 If you weren’t paying attention to the news in 2008, you might not have noticed that Zimbabwe’s currency went through a period of hyper-inflation as Robert Mugabe’s unspeakably-corrupt government printed more and more money to keep itself running. Part of the way they maintained value in these bills were to sell them overseas to currency collectors. This hun-trill-dollar-bill looks neat and it’s only $1.44, but it indirectly funded Mugabe’s tyrannical reign in which he seized private equity, persecuted the poor, openly murdered and abused protestors, bombed the offices of national media reporting on his corruption, and dozens of other crimes against humanity.

The number on that dollar bill is really high though!