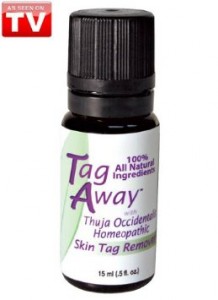 “Tag Away”, which claims to be seen on television (what channel? the Skin Tag Network?) also claims that it removes skin tags. Which it doesn’t, because it’s homeopathic, meaning it doesn’t contain any active ingredients.

Somehow, though, where most homeopathic treatments consist of just water, Tag Away manages to pack some foul-smelling “natural” ingredients into its $16.49 half-ounce bottle, a combination of leaf oils and “other natural ingredients.” Customers report that, as you might expect, it doesn’t work, and it smells like shit.