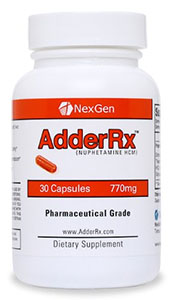 AdderRX, sold as an “Adderall alternative”, is a jumble of stimulants and nootropics marketed to students. It contains the FDA-banned compound DMAA (1,3-dimethylamine), a stimulant which has caused dozens of health problems, including 5 deaths, since 2008. It also contains synephrine, a chemical that fell out of use in the 1930s, displaced by vasodilators/stimulants that were more effective with fewer side effects. Mixed in with these two shitty drugs are caffeine, vinpocetine, schizandrol, citicoline, and hordenine, all of which raise your blood pressure and, apart from caffeine, are relatively new and untested.

The manufacturer even has the gall to refer to it as “Nuphetamine” in parentheses, suggesting that it is an amphetamine derivative, but no, it’s a quasi-legal mix of heart-explosion chemicals with unknown side effects.