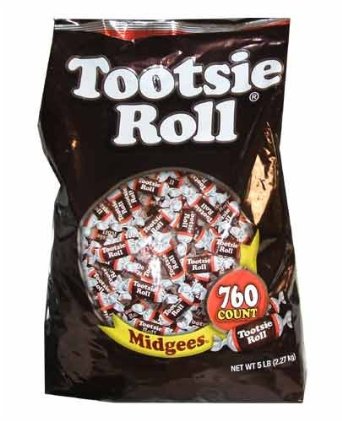 This bag of Tootsie Rolls contains 760 of the awful little turds, and I guarantee you that not one of them is going to even be unwrapped unless a diabetic man begins to go into shock and falls on the floor next to one. They’re not chocolate, they’re not hard candy, they’re not soft candy.

One reviewer notes “Took my husband 2 weeks to finish the bag.” Yeah, because he didn’t want to throw the whole thing in the trash at once, because that would make you feel bad.

But Tootsie Rolls aren’t the worst. Tootsie Roll Fruit Rolls were apparently designed by a cruel man or woman at Tootsie Roll who, as they watched the machines in their candy factory churn and thrash, thought “Tootsie Rolls taste too good.”