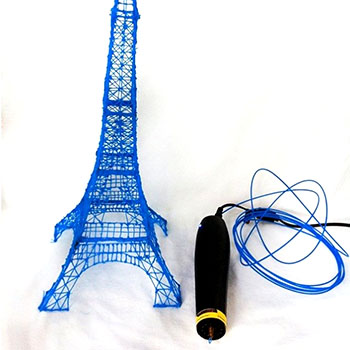 The “Yaya 3d pen” would be cool as hell if it wasn’t a complete, head-to-toe ripoff of something called the 3Doodler, which does the exact same thing. You use strands of heated plastic to “doodle,” and the cooling plastic holds its shape as you move the tool through the air, allowing you to draw in three dimensions. The 3Doodler doesn’t come out until February, and made the mistake of showing people what it was & how it worked way before they made them available.

The makers of this ripoff even went out of their way to list it as “Like 3Doodler” in the title, and in addition to the pen itself, they created and are selling plastic filaments to load into the pen.

If it wasn’t immense and bald-faced theft, you’d have to admire their industry.