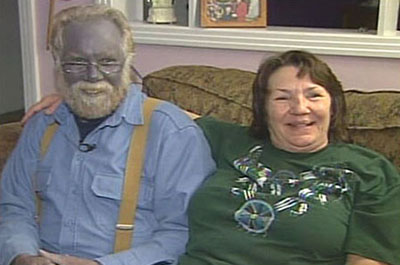 Even though Paul Karason hit the talk show circuits a few years back to show off his blue-gray skin, caused by his chronic intake of colloidal silver, you can still purchase this toxic supplement. There are several kinds available, but this particular brand, Natural Path Silver Wings, is the worst, mainly because they suggest you give it to children. Not only that, but it has over a hundred psychotic reviews. People are claiming that they no longer have to take antibiotics, and that it’s healed second-degree burns, cleared up pinkeye, stopped dandruff, and cured influenza. This guy even claims that colloidal silver healed a bite from a brown recluse spider.

Convinced that Paul Karason was trying to discredit their mystery cure, colloidal silver proponents celebrated when Karason died last year, at the age of 62.