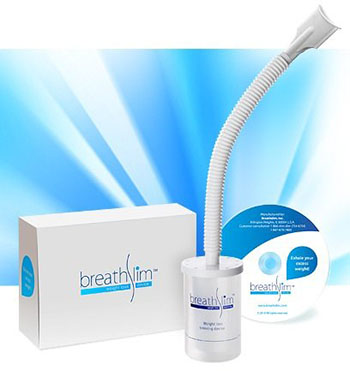 The Breathslim is a $40 plastic cup-and-straw set supposed to make you lose weight. It doesn’t, because it’s a hoax.

You should check out the person who asked the manufacturer “Is it gluten free?”, though.

UPDATE: The COO of Breathslim, Eugene Shlyakhta, wrote me to say this:

Stick to children’s books and license plate frames and stay the fuck away from medical devices.

I didn’t feel it necessary to discredit the Breathslim in a detailed fashion when I first wrote about it. It’s obvious that you can’t lose weight by blowing through a straw. But here are the gross, boring details of why the Breathslim is not an effective weight-loss device:

1. Breathslim claims that it performed a clinical test at USC that shows the Breathslim is an effective weight-loss device. Unfortunately, according to the information Breathslim published, this test was done on a sample set of 40 adults, and there was no control group used in the study. This means that any conclusions they would have drawn from this would not be statistically significant. Claiming that your plastic cup was “clinically tested” looks great in ad copy, but you’ll note that it doesn’t say “Clinically proven to cause weight-loss.” It says “clinically tested.”

2. The Breathslim is a ripoff of the Frolov Respiration Trainer, a medical device used to treat asthma. There are no published, peer-reviewed articles that show that the Frolov device treats anything other than asthma. The “inventors” of the Breathslim modified the device so it could be patented.

3. Oxygen saturation is not a limiting factor in metabolism for the vast majority of people. The slight increase in oxygen saturation that occurs with deep or controlled breathing does not cause the basal metabolic rate to increase. In fact, the concept of “slow metabolism” versus “fast metabolism” has been shown to correlate to a 6% difference in calorie expenditure in a clinical setting. Metabolism is an easy scapegoat for weight-loss failure, but it’s not the cause of weight-gain or maintenance of an overweight or obese state. Excess calories, not “shallow breathing” or a low basal metabolic rate, are what causes weight gain in most people.

So, yes, the Breathslim is a hoax. I’d love to be able to blow through a $40 plastic straw to lose weight, but it doesn’t work.