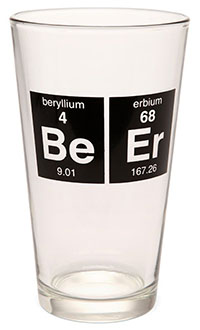 Demographically targeted at people who “fucking love science” but don’t love it enough to have learned anything about it, the Periodic BeEr Glass points out that two unrelated elements spell the word beer if you put their periodic-table entries next to each other. The Periodic LuNCH Box does the same, with different elements, for the same reason.

Instead of an explanation of why finding patterns in letters isn’t relevant to science, I’ll point out something mildly interesting: you can buy a tiny amount of erbium (Er) online if you want it for some reason. It’s worth around $5 a gram in bulk. Lutetium, the “Lu” in LuNCH Box, is worth around $340 a gram, roughly ten times the price of gold, and is rare enough that it’s not commonly resold to people online who just want a vial of it for some reason. But the most expensive element in the world right now is the radioactive isotope Californium-252. Only eight grams total of this element have been refined since its discovery in 1950, and each one of those eight grams is worth around $27,000,000.00.

Of course, if you just want something radioactive, you can buy a chunk of radioactive uranium oxide for twenty bucks.