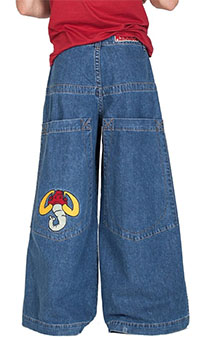 Of all the things you could bring back from the 1990s, JNCO jeans are perhaps the worst. This isn’t a third-party seller getting rid of twenty-year-old deadstock pants, either. They’re being made again, new, in several styles, for people who could have been conceived by someone wearing JNCOs in the 90s, and born inside of them nine months later, sliding down the enormous leghole to the guitar crunch of Ozzfest, umbilical cord clamped shut with butterfly clips, doomed by society to wear the same foul pants twenty years later.