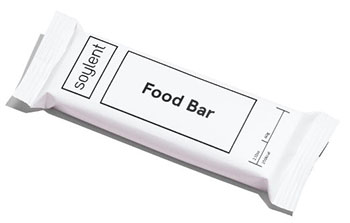 Soylent, a product named after the fictional product Soylent from the movie “Soylent Green” (and originally the book “Make Room! Make Room!”) was to be a nutritional shake you would drink instead of eating meals. Even though such a thing already exists, “lifehackers” picked up the Soylent drink and ran with it, the idea being that our lives are so busy with work and leisure that food gets in the way. The company sold millions of dollars of Soylent, despite the fact that the product was initially made in a converted factory building that contaminated the powdered version of the product with mold and heavy metals.

A couple of years later, Soylent released Food Bar, the Repo Man-styled block of solid food that enables you to… uh… not eat food, I guess. This product also obviously exists in every gas station and supermarket on the planet, usually in the form of a protein bar. But this didn’t stop the lifehackers, who bought it, and ate it, despite it making them ill. Some users vomited after consuming Food Bar, some had diarrhea, and the luckiest Food Bar consumers experienced both. The company insists this is due to everyone having an intolerance to one of the ingredients, while many users suspect contamination of Food Bar has led to Food Poisoning. They continue to eat Food Bar, tracking their horrifying symptoms in spreadsheets, unaware that being tricked into sickness by a company telling them they don’t have to eat food might not have increased their productivity after all.