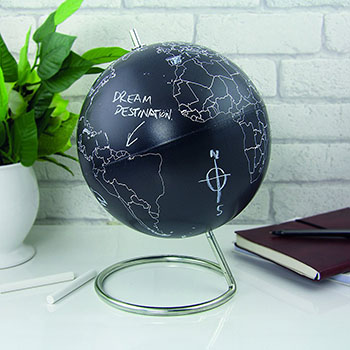 For the person with a lot of chalk in their life, who loves writing in chalk on objects, the Chalkboard Globe might seem appealing. Of course, reviews note that it’s… drumroll… hard to write on with chalk.

It’s similar to the concept of the scratch-off map, which is a poster-sized map of the world covered in lottery-ticket foil, which you scratch to indicate where you’ve been in the world. I would feel mildly guilty removing the entirety of Canada, seeing as I’ve only been in a handful of its cities along the southern border, and even worse removing the foil from Mexico, after spending an afternoon in Tijuana. For that matter, I’ve never been to Alaska, our nation’s largest state, or Hawaii, its most Pacific Ocean-y. Do you remove the segment of Antarctica claimed by the United States? I realize this is overthinking what amounts to a huge lottery ticket, but experiencing different cultures isn’t like collecting Pokemon, so I’m probably in the wrong target audience for either of these products.