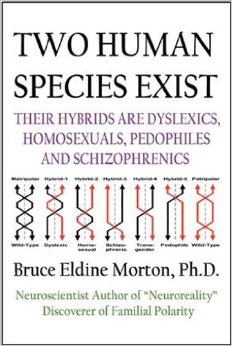 What happens when an educated man who hates non-straight people and the disabled takes high doses of psychedelics for fifteen straight years? Let’s start with “Two Human Species Exist: Their Hybrids Are Dyslexics, Homosexuals, Pedophiles, and Schizophrenics,” because then you’ll immediately understand why I was interested in Bruce Eldine Morton, Ph.D. This is clearly a nutcase book, and its premise, which is that left-brained and right-brained people are two separate human species, doesn’t even need to be specifically discredited. Research within the past few years has shown there is no “handedness” in brains, and that simple correlations of artistic or logical behavior with a particular side of the brain are not possible.

Dr. Bruce earned his Ph.D. in 1965, and completed his postdoctoral work at MIT and Harvard later in the 1960s. He worked professionally at several universities until his retirement in 1995. He clearly had his shit together, to some degree, to be able to do this. It wasn’t until I found his 2013 book “Psychedelic Visions From The Teacher” that I figured out how he came to the conclusion that homosexuals are from right-brained men having children with left-brained women: He tripped balls for 15 years straight. The description of the book describes how he “used psychedelic compounds to explore inner space” for fifteen years, which is also just about exactly the time period between when he retired and when he published this latest book.

It’s true that psychedelic experiences can give you a new perspective on life. But it’s also true that heavy use of serotonin receptor agonists, a class of drugs that encompasses nearly every known psychedelic compound, can permanently alter or diminish the brain’s cognitive ability. It’s not hard to imagine that fifteen years of constant use of illegal mental-powder has at least some chance of wrecking your ability to live in reality, even if you weren’t already a hateful shithead.

Or, as Dr. Bruce would put it, “Neuroreality: A Scientific Religion To Restore Meaning, Or How 7 Brain Elements Create 7 Minds And 7 Realities, Discoverer Of Triadism, Familial Polarity Galactic Big Bang Engines And The xDARP”, which also happens to be the title of his 2011 book.