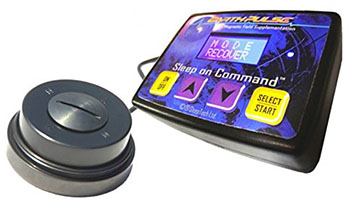 There are hundreds, possibly thousands of devices to block EMF radiation, long-held in the medical scam community to be the source of every mental and physical problem an alive human could experience. Yet, the EarthPulse Sleep On Command Sleep System operates an EMF transducer directly below your head while you sleep, and the same quacks say it’s great, and works.

It’s not cheap, of course.

There’s also a similar “electromagnetic field therapy mat” which you unroll and lay on, or stand on, or sit on. It doesn’t really say! It’s almost exactly the same price as the sleep thing.

The PetPatch is an EMF transducer for your pets, which, thankfully, is an order of magnitude cheaper than the other two. It’s got me wondering, though – what if you installed a PetPatch and an eLink EMF Neutralizer crystal on your dog at the same time? I mean, nothing would happen, except the dog would try to take his necklace off, but it’s funny to imagine that any of these things exhibit any effect beyond reducing your bank balance.