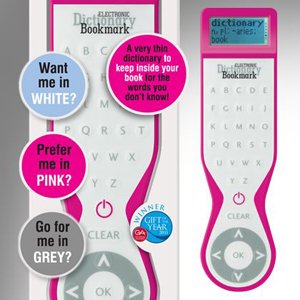 It’s entirely possible, as the manufacturer claims, that this “electronic dictionary bookmark” was the Gift Of The Year in 2011, even though it doesn’t say who awarded the title, or what other gifts were considered. That also doesn’t explain why people are still buying it in 2021 and leaving reviews. It’s not inherently bad, except for being expensive, not containing many words, and being another piece of disposable electronic trash that will go to the landfill when it breaks. It’ll have company there with its distant cousins Password Safe (a battery-powered device that loses your passwords,) the preloaded Library Of Classics (a $99 mp3 player you can’t load with new material once you’ve listened to it,) and iPad Calculator, an iPad-shaped calculator whose buttons are styled to look like iPad apps.