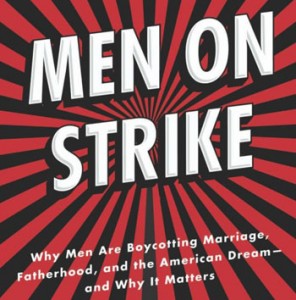 “Men On Strike” claims that American society is anti-male. The “man-child” phenomenon, the author claims, is due to the fact that being a male in the 21st century is a handicap. It has to do with the fact that “the system is stacked against them”, supposedly.

If you have a half-hour to kill in the pursuit of getting mad at Men’s Rights Advocacy (or you just like to read some weird justifications for trying to reverse women’s suffrage and abortion rights) then, as always, feel free to hit the “look inside” button and get yourself mad.