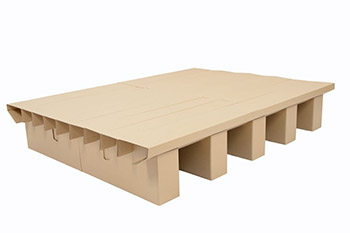 The KoolKarton is a bed-frame made out of corrugated cardboard. It claims to support 1000 pounds, although, obviously, if it’s not kept completely dry, or you sleep on it for longer than a few months, or you use it for anything other than sleeping, it’s going to collapse. Or, as one customer mentioned, if it’s damaged during shipping or packed incorrectly, it won’t be able to hold any weight at all.

That doesn’t mean that there’s no use for corrugated cardboard, though. This kit lets you make a cardboard playhouse for your kid, and they can draw all over it, and sit in there and talk to themselves and play Nintendo. And just like the bed frame, when it inevitably falls apart due to the inherent flimsiness of cardboard, you can throw it in the recycling bin, confident that it will be made into something useful. Like an Amazon Prime box, with a new cardboard playhouse inside. Ashes to ashes, box to box.