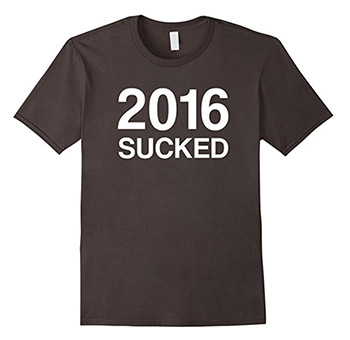 It’s not that this calendar year was unarguably wonderful, taken overall or as a collection of independent events. It’s just that repeating something over and over causes it to become worthless, in the way that saying “newspaper” a hundred times in a row will leave you wondering if you’re saying the syllables in the right order, concentrating on the movements of your throat and tongue rather than the meaning of the word.

Reducing all of the political and social problems of the world in the past year into a catchphrase is not only intellectually lazy, and flaccid in its delivery, but it’s part of what contributes to our problems as a whole  in the first place. Calling an entire year a “dumpster fire” is semantically the same. It’s the absence of meaning, coupled with the suggestion of something thoughtful, that makes this so repugnant. If you oppose fascism, say that. If you’re a socialist, say that. If you believe women, minorities, and the poor should have the same rights as rich white men, say that. These are all specific ideas that are worth fighting for. If you’re afraid to put your beliefs on a t-shirt, then don’t buy a t-shirt that says “I Hate Bad Stuff And Only Like The Good Shit.” Just skip the t-shirt thing entirely.

Researchers have found that the lower a person’s cognitive ability, the more receptive they are to believing that vague statements carry deep meaning. (Here’s the study, if you’re curious.) So don’t take offense if you really do believe that “2016 Sucked” or “2017 Will Be Better”. A quick glance at Facebook will show you that many, if not most, of the people you know also like to repeat the same things back at each other, devoid of meaning. And know that given the success of this idea, there will undoubtedly be a “2017 Sucked” shirt, and 2018, and every year from this point forward, until the destruction of the earth prevents cotton from being grown, processed, knit, and screenprinted.